"Mud"; When you can't find Paradise, there is only Crawfish and Unrest 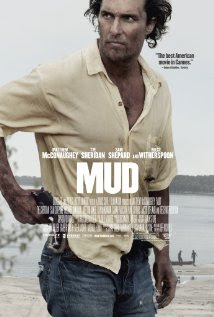 "You can't trust love; it will up and run out on you". That is what the main character Ellis is told in this film by his father, who is getting ready to go through a divorce. It takes a lot for me to say a movie is perfect, and I swear that someday soon some flick will get one or two stars from me. But this is where my readers and film connoisseurs get their dinner and dessert to boot.

Director Jeff Nichols said that he wanted to bottle the excitement and pain of being a teenager and as far back as the 1990's; had envisioned Matthew McCaunoghey as an actor in it. Paying homage to the lifestyle; river culture, and scenery of Arkansas, this is the biggest production ever shot in the state.

Tye Sheridan as Ellis and Jacob Lofland as his adolescent sidekick Neckbone are making their way down the Mississippi when they find a boat that is high up in the tree from floods of the past. They poke around inside and find that a fugitive (McConaughey's character Mud) is hiding inside. Both are coming of age early because of the roughneck culture of the area; yet still hanging on to their childhood in different ways. The parallels to classics like "Stand by Me" are abundant; but not overused or earmarked too much. We are shown a man who has killed someone out of his love for a woman, and is marooned until some form of help arrives.

As any teenager would have to ponder, the two boys make a decision to trust Mud. They know that he is inherently dangerous, but they immediately think that he is not a threat to them. So many good things happen here; the usual throwback to Mark Twain doesn't even scratch the surface. You can almost smell the river catch and hear the old Ford trucks try to start up in the morning.

These characters are something concocted even deeper than the first layer of Americana; deep in the creekbanks and Piggly Wiggly stores of the south. This America is not as concerned with texting and Iphones (yet), and family roots are so troubled and encompassing that they could shift a home's foundation. The fixation with the river, old motors, salvaged parts, and first pangs of teenage love even bring to mind the way the first "Karate Kid" movie spins its plot.

Seeing Joe Don Baker cast as the leader of the ring that wants Mud dead is perfect, as is Sam Shephard in the role of a neighbor across the river who may or may not do something for Mud. About 45 minutes into the film we are shown more sunrises, more tension, small dirty hotel rooms, and Reese Witherspoon's character of Juniper is amazingly taut and fitting for the storyline.

As more and more happens, you are not lost in the script, or production values. Yes, the end is a bit different and feels like it had a different director's touch. It seems that pictures like "No Country For Old Men" are inspiration here for themes like desolation and loner issues. When a movie closely examines not only the plot at hand, but the whole landscape it takes place in with painstaking effort, it has to be selected by me as a triumph.

The vision of a class that could never find paradise but can only find unrest and crawfish; is impeccable. I went in preparing to be engrossed and went far beyond. If you have experienced teenage love, divorce, or being on the lamb, this film will speak to you. All I can say is "Bravo" and let the sentiment wash over you; we all have abandoned boats or salvaged motors dancing around in our subconscious somewhere.
Posted by Jonnymwpro at 7:47 PM