Its safe to go in the water and watch: "Jaws 2" 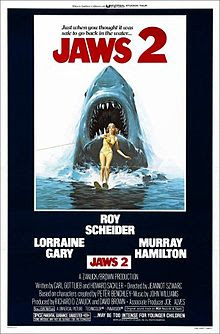 Everyone around knows that "Jaws" was a masterpiece, and many were very obviously worried that when the sequel "Jaws 2" was released it would not even come close to measuring up. Some people argue that it does not, and while in some ways that could be true; it is a highly watchable sequel. The barrage of merchandising was much more elaborate; trading cards, towels, and models were made. I was able to get the full set of trading cards online two years ago and one of them has a great still of the shark coming up behind the waterskiing woman! It is generally viewed in the film world as the best Jaws sequel.

Another high point is that at least of course Roy Scheider is still chief Brody; that would have been a little different to swallow another actor taking over those reins. In the beginning some divers are shown taking pictures of Quinn's boat from the first movie, and are attacked by what appears to be the ominous great white breed of shark. Then the shark moves closer to the town, who have already endured this dread before. One of my favorite scenes is that of the waterskier; close to shore a woman is devoured by the shark, and these sequences provide as fun a watch as some of the ones in the original film. Some of the shots are right at water level and really instill the fear of being hunted in the water.

The driver of the boat mistakenly uses a flare gun and kills herself when gasoline spills on her. The way in which it all goes down is pretty high on the "chomp-a-rific" gore scale, and the movie really fought for a PG rating in 1978. When the mayor gets angry again at Brody for the shark warnings, it is not stale, the pacing is good and its fun to watch the town under siege and panic once again. There is a great scene where the chief mistakenly fires at bluefish while watching over the beach; and he forbids his son to go sailing; making him get a job for the summer to keep him safe. Brody is then fired, and since we flirt with this a little in the first movie it's nice and heavy to watch it be brought to light in the sequel.

Brody ends up going after the teenagers who take sailboats out, and there is a great chomp scene of a helicopter pilot. The shark then goes and terrorizes the teenagers on some modified sail and pontoon boats. Having one of the girls be so scared she goes into shock and unable to speak is also a good horror based touch. These different boats make for a nice change of dinner plate for the shark to eat off of, and the ending where Brody comes to the rescue is suitable. The success of "The Godfather II" was churning behind this one to make sequels a big thing, and "Rocky II" was a big one opening shortly after this. Some say it is predictable and we don't get all the sheer horror of the first; but it can be watched again and again; and it is actually somewhat of a blueprint on how to not completely ruin a sequel. It is great to revisit; and captures a fairly revolutionary time in film making.
Posted by Jonnymwpro at 3:13 PM