"Heat" by Michael Mann: The City Of Angels' Epic Saga bathed in blue 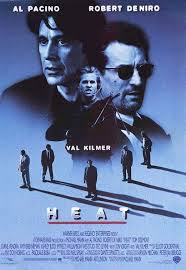 Bathed in a sea of blue, Los Angeles has almost never looked better. This epic crime drama from Micahel Mann is said to be his best, what he wanted to do with "Thief" from 1981, with a bigger budget. Al Pacino is Vincent Hana, a cop who is in another failed marriage, burnt out yet still on overdrive. Robert De Niro is Neil McCauley, a man who did time in Folsom who still takes down scores from safes and banks. Val Kilmer has a good supporting role as one of De Niro's henchmen, and these guys really do not mess around. In the beginning we see Neil steal an ambulance and the first score is an armored truck. They hire some help that goes a little crazy and kills the driver, and sparks start to fly left and right.

Many did not like the length of this film, and at almost three hours that is understandable. A very ambient musical score, and McCauley's hard nosed desire for one last retirement plot make this picture sizzle. The layers of blue are shown to us in perfect form, when Val Kilmer is asleep on McCauley's floor after a fight with his wife. De Niro sets his gun on the counter, gets coffee for them both, and we see the Pacific Ocean behind them in it's early morning glory as Kilmer stumbles up. Michael Mann also achieves these perfect shots in "The Insider", in which he shows us Russel Crowe standing by a lake getting ready to testify against big tobacco. The simple, modern apartment which still has no furniture is the homage to the man who has everything but wants just a little more. 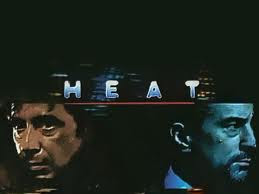 Amy Brenneman plays Eady, the lonely artist who McCauley meets in a bookstore. At first completely snubbing her, he falls for her lost persona, a delicate woman who moved out West. His desperation for companionship is a wonderful theme, and the real treats in this movie happen when Pacino and De Niro sit down together for Coffee. McCauley is told that "now that he has been sat down with in person, I am not going to like it when I am going to have to take you down". He returns the qoute by telling Pacino he neither will like it; and the stage is set for climax. a portrait of the busy highways, secret information being sold, banks letting themselves be ripped off for insurance money, and shoot outs in broad daylight, "Heat" is a modern winner of a film. Taking from some of the best dramatic scenes of his TV series "Miami Vice", Michael Mann shows us what the big boys do here when they sit down to making an epic gangster movie.

Posted by Jonnymwpro at 9:55 PM