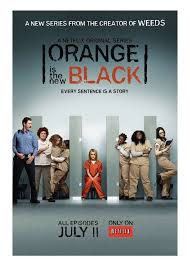 Said to have already been renewed for another season, "Orange is the New Black" is the story of Piper Chapman,(Taylor Shilling) who is sent to prison for being in possession of a large amount of drug money. Created by the brainchild that served us up "Weeds", the expectations for the series were high. I got the chance to sit down and go through the first two episodes tonight.

At first I was skeptical and did not know if the leading character of Piper would appeal to me. Jason Biggs, of the "American Pie" franchise, is cast as Piper's fiancee, and I felt so neutral about him that I had no idea if I would enjoy this journey. He is really quite endearing as the perhaps half-employed writer who has to take her to prison and see her off to being locked up. She is the epitome of someone who would "not make it" behind bars, delicate and not street smart.

I was a fan of "Weeds" but was leery going into these first episodes, and should not have been. It is refreshing, dark, and shines enough light into a scary place while reminding you that you do NOT want to be there. The flashbacks are really set up quite perfectly. We see some of the same old cast of  "Weeds" and they are given ample room to shine and show us their same quirks with another storyline.

Every prison story is just a little bit different. But this one taking place in a women's prison is actually quite refreshing. There are the same sexual stereotypes that go along with the setting but they are played out a little differently than normal. Without really giving too much away, some of the best things that could happen to Piper happen, and some of the people she would want to see least are also there to greet her. No one wants to be behind bars, and there are many things that are inappropriate about this story.

It really has to be that way, because each prison is its own take of Hell on Earth. With only two episodes down, I can see some interesting alliances, and enemy forces at work as well. You really do wince when watching Piper first hit the cell block, and just calling her and her fiance "yuppies" don't do them justice. They have their own special kind of hipster love; with funny little quirks. Reminding us of where we don't want to go is part of what "Weeds" got popular for, and I have a feeling that I and much of the rest of the viewing world will be eating up the remaining episodes of this show quickly. Even if it is sneakily by flashlight, after lights out.