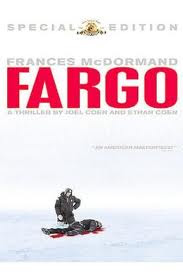 When you are dealing with the Coen bros telling a story about a struggling car salesman who arranges to have his wife kidnapped, you know that it's probably going to be quirky, strange, and desolate. Billed by Siskel and Ebert as their favorite movie of 1996, "Fargo" shows us the story of Jerry Lundegaard, who is under pressure from his boss at a car lot to upsell features; and it's all really not working for him. He is cast perfectly as someone who no one seems to care about; his problems are real but his father in law (Harve Presnell) and wife (Kristin Rudrud) naively think he will keep plodding along.

As his pressures escalate, he talks a convict at his car lot into introducing him to introducing him to two criminals who will kidnap his wife, while pocketing some of the ransom from his rich father in law. Steve Buscemi and Peter Stromare play the two crooks that are hired, and their dual combo of sleaziness is rigidly perfect.

Buscemi plays the ultimate con man, not nearly channeling the dominance or organization of his role in "Boardwalk Empire". Stromare is a Nordic, angrier, more pissed off criminal who really does not say much. A cop is killed after stopping them for not having license plates, and immediately afterwards a couple who witnesses this is shot by the criminals as well.

Enter Marge Gunderson, (Frances McDormand), who shows up at the homicide. She is very pregnant and has the true northern accent; this is her signature role as a woman who is painfully simple but has her police wits entirely intact. One of the real treats of this movie is watching her navigate the case while having to be utterly physically uncomfortable.

Her candor is perfect and her charm is so subtle it's like taking a strange pleasure in scraping the ice of your windows. And in the locale of this movie, there is plenty of ice to scrape. The first meeting with the ransom gets utterly botched, and Buscemi is shot in the face. Jerry's father in law is shot here, and things escalate into madness. The best things about this movie are Marge's persistent persona of investigation, and watching Jerry try to hide a secret.

We are led to believe that he does love his wife; that this was probably just a scheme to get money. The real element of choice film here is watching things get worse for Jerry. A tale of a man's problems takes extra craft to spin this well, and it is a signature role for Buscemi as a crook whose main nuance is having no real care for anybody in the world.

This is a top notch film; and it's themes of desolation are Paralleled by "No Country for Old Men". The two films would be great to watch together on the same evening, to expose yourself to the true quirks that make the Coen recipes taste so good.
Posted by Jonnymwpro at 3:47 PM