Billed as both quaint and devastating, "Jacob's Ladder" is truly in a category on a bit of an island; it is one hard movie to figure out the first time you see it. Tim Robbins plays Jacob, a Vietnam era veteran who starts on the ground in the war, with some deafeningly slow and loud chopper blades, a hell of a lot of confusion, and enemy fire. Many of his comrades start convulsing and having lethal problems, and shaking like epileptics. Jacob runs into the jungle and is stabbed by an enemy, abruptly and spookily. 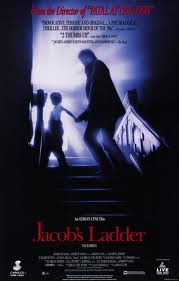 Then we bounce to a shot from the floor of a New York City subway, where he is now a postman. He is unable to get out of the turnstile area and while another train passes, it looks like there are some sort of morbid ghosts on board. We see the woman he is now living with (Elizabeth Pena), who also works with him. They seem to have a claustrophobic yet normal Big Apple relationship, both working as much as they can. Jacob gets an incredibly high fever one night, and is thrown in a bath of ice. He sees some of the most hellish visions yet, a morgue, a mental hospital, and even places resembling the gore of the first "Saw" movie.

Whenever he goes awry he is back on the tweaking table with his chiropractor Louis, who is akin to a supernatural figure, the only one who can steer him on track. Jacob also lost a son before the war, and is haunted by visions of him in his Saturday morning pajamas and other tender family times. This has the ability to mess with him letting go or dealing with any of these wild things happening to him, and he meets with some old war buddies. Now the government says they were never in Vietnam, and his other buddies are seeing intense and otherworldly things as well.

Through some hard to follow happenings, we see that Jacob was killed by a fellow troop, and that they were given a drug called "The Ladder" to make them more aggressive. It is evident that now the whole time in New York has been a journey while dying, and it is horrifying. This movie can really get under your skin and can be a bit anguishing but is a true B movie hit. The story is told very trickily, and many viewers wouldn't have it any other way. When Louis is repairing Jacob on the table, he tells him a memorable thing, "If you are frightened and you are holding on, You will see devils. But if you have made your peace, the devils are really angels, freeing you from the Earth".
Posted by Jonnymwpro at 10:30 AM