Tom Hanks, Paul Newman and Jude Law are at the forefront of this story about a connected man and his son who are on the run and in search of those who murdered the rest of their family. After finishing "American Beauty", director Sam Mendes wanted to have something that focused more on imagery and not as much diolouge; this was part of it's criticism, but also part of it's acclaim. Tom Hanks is Michael Sullivan, who works in Rock Island, a smaller city in Illinois crime ridden 1930's. Tyler Hoechlin is the child actor who plays Sullivan's son, a twelve year old who witnesses a murder.

The party who was in charge of the witnessed murder kills Sullivan's wife, and other son, and the two head out to Chicago to seek work with Al Capone and find the wherabouts of the murderer, named Connor. Before all this we get a glimpse of life before the incident, and Paul Newman is excellent as the local Rock Island crime boss. When the Capone crew is asked permission to work for and kill Connor, they do not oblige, putting Michael and his son is a predicament. They begin robbing banks that house Capone's laundered money, in hopes of making an exchange.

Some people did not enjoy Jude Law cast as a henchman hired by Capone to kill Sullivan, who broodily photographs his victims. For a few reasons I highly enjoyed him in this, he seemed a little crazy and not as hard edged as some gangsters. There is a scene in a diner where he begins to actually talk to Sullivan and his son, and they quickly realize its a setup. Sullivan teaches his son to drive the getaway car, and the movie shifts gears into a bit of a father/son classic. When i first saw this, I did not know it was based on a graphic novel, which has got to be kind of a nice specimen, a gangster novel instead of monsters and superheroes for a brief change. 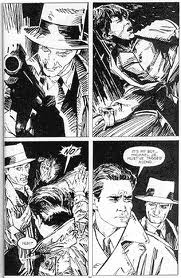 Sam Mendes had attempted to make a gangster film here that avoids the same themes as others, and I widely think that he has. It is a bit hard to re watch because of the somewhat surprise ending and some drawn out moments. Some critics felt detached from it, like they did not have the ability to care about the characters. 2/3 of the way through, Sullivan is injured and the two have to stay with a couple on a farm; at this point we see some wonderful things happen; that engrossed me a bit more in the relationships. This is one of my favorite roles for Tom Hanks, who is known as a a take him or leave him actor.

There are some great scenes of the 1930's car rolling through the Midwest, and with that moving car, there is a theme of comfort, as if Sullivan, the boy, and the car are one. The best thing about this is that if you are able to be pulled into it quickly enough, it sticks with you; and there are some cold sensations that the winter, rain, and robberies conjure up in you. When you as the viewer ride with Sullivan and his son in the old car, there is a bit of foreboding doom. But there is also a glimpse of a land with promise; that was being eaten by the economic and criminal cancers of the era.