"The Beach"; not the usual tourist trail 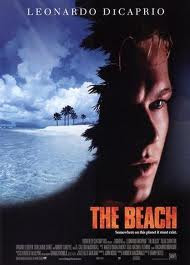 Danny Boyle started something special as his forte when He put out "Trainspotting", a quirky, foot tapping humor that he then coats over as a director with rich visuals. "The Beach" is a tale of a forbidden island in Thailand and the consequences of trying to share it with others. Leonardo DiCaprio stars as Richard, a college age American who is looking for something different, and starts out in Bangkok.

Right in the beginning we see one of director Boyle's touches, credits that illuminate a bit like the street lights of Bangkok. Many film viewers with myself included thought from the previews that this was going to be some sort of "Blue Lagoon" movie, all romance and just plain lame. Well, there is some romance, but what Boyle captures well is the spirit of traveling in a place like Asia. Years later in "Slumdog Millionare" we see him overlay the same rich tint to the nation of India, a more developed, choreographed film.

Even though parts of this movie are way overacted by DiCaprio and the rest of the bunch, the real treats here are the visuals. With the clear water of the paradise island and the journey, special care is taken to inject a sense of ambience into the movie. There are scenes of outer space, stars, and reefs under clear water that are very rich, and the idea is to make you feel as if you came out of a loud dance club and into this paradise. It is not old school cinema by any means, but it's ample.

Richard meets Francois (Virginie Ledoyen) and her French boyfriend (Guillaumme Canet) while in Bangkok and convinces them that a map he has acquired from a fellow traveler named Daffy (Robert Carlyle) is where they need to go, a promised land of blue waters and plentiful marijuana crop. Daffy is played by the same actor who was Bigby in "Trainspotting", crazily throwing a glass of the deck in a pub in that film, injuring a woman and laughing. After talking the couple into coming with him, they have to swim across a break to the island, and immediately encounter hostile marijuana farmers there.

Richard's biggest mistake is giving some surfers on the mainland of Thailand a copy of the map to the island, and they finally show up. They are killed brutally by the marijuana farmers who have made the rest of them promise to never tell anyone else where the island is. I won't spoil the rest, but just before this is where the movie gets slightly worse. It is very flawed, and in no way a masterpiece.

The best real purpose of it is watching for the visuals and exotic locale of Thailand. The over acting comes in the forms of yelling, high fives, and some weird communal activities on the island. But the first half is fun watching them get there and learn to survive. I have a soft spot for this movie, and it is definitely not for everyone. Some of my favorite places are remote parts of Hawaii and so I pop it in when I am craving to get somewhere warm.
Posted by Jonnymwpro at 11:41 AM