"The Mosquito Coast"; Harrison as an inventor gone awry 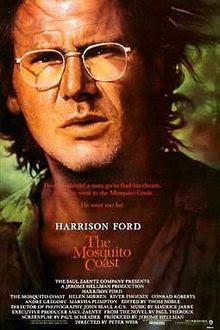 Far from the epic adventure and thrills of the Indiana Jones franchise, a picture came out in 1986 that was under the radar for quite some time. "The Mosquito Coast" was a story of an inventor named Allie who takes his family to the lush foreign jungle, to escape consumerism and the capitalist structure of the states. Supposedly Jack Nicholson was the first pick for this film, and although that could have been a good choice; Ford is still a silver lining to this tale.

Helen Mirren is his wife, and a young River Phoenix is one of his sons Charlie. Some said this was boring and others like to comment on how it is Harrison's only movie that perhaps has not even made its money back. Being the son of missionaries who traveled to Bangladesh and other locations in Southeast Asia, I was drawn to it immediately. Shot mostly in Belize, the spirit of the jungle is definitely conveyed well. Allie invents in ice machine that does not impress the family's landlord, who is disappointed that the asparagus on the farm has not been tended to.

And he is a die hard atheist, not impressed by the efforts of local missionaries to convert and mold the natives. After arriving in an area that he deems perfect, Allie begins to build a civilization, with massive water systems and buildings. He even invents an ice machine that forever transforms the jungle economy and keeps the locals in amazement. As he slowly goes mad, he starts to mistreat his children and wife more. Even though it may never be said out loud, they are most likely yearning to get back to the states. After a violent conflict they all end up at the coast, where they build a lean to and Allie lies, telling them that America has been destroyed by nukes.

They almost perish in a storm, and it is quite painful to watch the family stranded by the sea, with a man who is now delusional. In the end of the movie the family drifts down the river again, starving and very distraught. A few other key things happen that I will not spoil, and we are shown a portrait of someone who went so far over the edge that he takes others down with him. A simple parallel to "Apocalypse Now" is not justice; this is an entirely different jungle tale. Some of the best parts are Allie's early rants about what is happening to America, and while in states of pre-delusion; he is half right.

This is not a movie for a "big night" on the blu ray, or for your blockbuster viewing of the week. But it could be perfect for a Sunday afternoon or a college class on social studies or political science, there is a lot to be said here. You have to go in a bit guarded, because it becomes a little dismal. But Harrison's performance is stellar, he seems utterly committed to success... a bit like Jonny Depp in "Ed Wood".

There are plenty of things wrong with the film. As a fan of things like Anthony Bourdain and having traveled a lot myself I can cuddle up to it a bit more. But anyone who loves film will surely enjoy watching a very mainstream actor take on a very deeply disturbed person. It is not epic, but so valuable in many ways. "The Mosquito Coast" shows us a much different heart of darkness, not as bloodthirsty; but still with a yearning for the barter of the villages and the lapping mouth of the river.
Posted by Jonnymwpro at 1:16 PM