Rewind to the Masterpiece about Replicants; "Blade Runner" 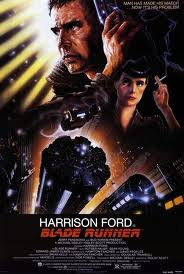 Los Angeles in 2019 is portrayed by Ridley Scott here with such painstaking effort that it could be said there are few films on the planet that trump it. Performing at not so hot levels in the theaters; it has since been recognized as a nearly immaculate cult classic. Dustin Hoffman was originally sketched in the storyboards, and was thought to be the pick, but Harrison Ford became the lead man after his performance in "Star Wars" and his keen interest in the story.

As so many great films are, it was plagued from the beginning; and also took a risk with lesser knows actresses Darryl Hannah and Sean young. Even Scorsese himself was a bit interested in the root derivative of the idea, the novel "Do Androids Dream of Electric Sheep?" Lighting instructors everywhere praise the film for its neon look, futuristic stark visions, and success with the constant element of rain.

Harrison Ford is Rick Deckard, who is brought in to hunt down replicants, robots built for menial tasks that are not supposed to be back on Earth after four years of existence. One of them has shot an interviewer in a questioning, and he is flown over a futuristic array of pyramids to investigate. On the ground, there are Japanese sushi bars, modern urban decay, and technical gadgets which do resemble those of present times. We are shown that Rachel, (Sean Young) is a replicant who believes her memories are real, and is upset at the suggestion they are not.

On the new blu ray that has just been released with many versions and workbook saga and a documentary, it is shown that Sean Young was cast perfectly; Ridley liked her iciness and she was almost just like a doll. Rutger Hauer plays a great villain in this movie, laughing demonically with streak blonde hair and having an amazing standoff with Deckard in the end. When interviewed, Hauer says it was hands down his favorite performance and movie. 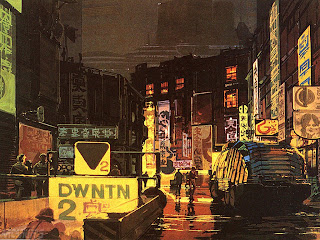 What audiences saw as flaws were pacing, introduction near the middle of a strange array of puppets and different feel in the cast. With the action not being constant even having a perfect standoff in the end, there are some identity confusions; and those who get frustrated with the typical A to Z plot did not understand the symbolism. The parallels to the future, and warnings about a world where the lower class is breached from any hope by means of technology, scanners, and profile tests were very landmark at the time. The true achievements of "Blade Runner" are the futuristic flying scenes, Deckard wistfully wondering what his journey will end like, and the portrayal of a world full of spinner cars and devices that were painstakingly invented by the crew.

As the spinners fly by the sides of buildings with an almost 1984 or "Brazil" themed warning of some sort of colonization, it was evident that Ridley Scott really was "exploring pain" since just witnessing his brother's death. Pitted up against "ET", "Star Trek II, the Wrath of Khan" and "The Thing" was another reason why this sci-fi film was a bit disappointing at the box office. Re visiting it now is always a treat, and the driving element of Deckard questioning if whether he himself is human wins the serious viewer over. So far ahead of it's time and so delightfully grim; I cannot shun this film by giving it any less than the full five stars. 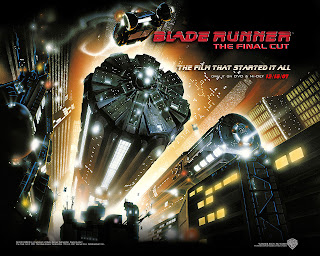 Posted by Jonnymwpro at 3:47 PM