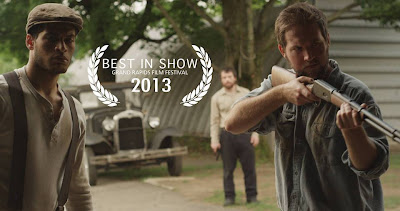 As of late, the zombie craze has taken over mainstream movies and television.  Various Hollywood franchises have taken a stab at this genre, and many have been successful at differentiating themselves from one another in order to create a loyal fan base and successful films. Not so difficult when you have millions of dollars and a massive professional crew at your disposal. Up and coming directors, on the other hand, have an even greater task to tackle if they want their work to stand out from the rest.

They must not only create something unique and appealing, but they often do it with a bare bones budget and a crew smaller than a football team. Independent filmmakers, like Ryan Geiger, writer/director/producer of Town Red, spend countless hours working on their films wearing many hats in the process, no doubt sacrificing their own livelihood and sanity for months or perhaps even years.

Shot over the course of four months last year, “Town Red” is the story of three men who attempt to survive  a horrific zombie plague that has wreaked havoc on their town. Patrick, (Geiger himself) is a religiously steadfast man who, in the opening scenes, faces a heartbreaking decision that causes him to sacrifice decades of precious memories in a matter of seconds. His working assistant and lifelong friend, Jeffrey (Michaiah Castro), is a fatally loyal man who  remains by Patrick’s side throughout every bend in the plot.

Neil (Michael Jefferson) one of the few survivors  left in town is a selfish country thug with a rotten attitude. Possessed by a heart full of hate and prejudice, Neil is willing to go to whatever lengths necessary to get out of town and flee to safety in a neighboring state.  When he arrives at Patrick’s garage in need of a vehicle, a large confrontation occurs, ultimatums are handed out, and deep seeded family secrets surface. 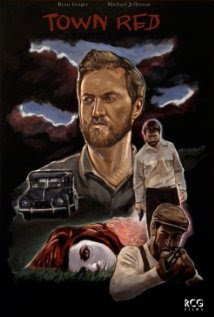 The nature of the zombie portrayal in Town Red is quite unique compared to many of the zombie movie prototypes. George Romero’s, early classics, for example, portrayed zombies as a class of rabid beasts that attacked in mass numbers by taking over shopping malls and even entire cities, needing the power of helicopters and special forces to gun them down. Other successful zombie films such as 28 days later and Walking Dead, also address a potential zombie apocalypse from the mass perspective. While these films will always stand out as benchmarks in this genre of film, it is refreshing and thought-provoking to watch a film like Town Red that deals with the notion of a zombie plague on a more personal and elusive level.


Town Red stands out as a film with a heart in a class of films that typically concerns itself mainly with gore and danger.  The film ultimately draws a parallel between a zombie outbreak and the many socially infectious behaviors that already invade our daily lives. Through this, Geiger asks us to consider the question: when human beings are pushed to their limits and stripped of absolutely everything, who are we? Who do we become? Even scarier, do we stay exactly the same?
Posted by Jonnymwpro at 10:55 AM