Surfing without Paddling; attractive even if Cheating 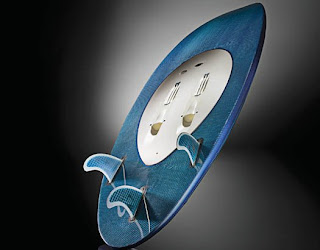 Everyone on a surfboard has imagined at one time not having to do the hard work of paddling out, turning around and sometimes.... just waiting for a long time for a wave. Even though it could be considered not purist, so could the use of jet skis, which really enable pros to go where they want to in the water right away. This battery powered motor is built into some surfboards, at a cost of close to five thousand dollars. A bracelet remote controls the motor, which also kills automatically upon wipeout. Long ago the valiant riders of the South Pacific and California would have scoffed at this, but at speeds of up to 12 mph; you'll have a little bit of arm power left to sling the cooler of beer close to the campfire later.