Like Catnip for the Sci-fi Connoisseur, "Close Encounters of the Third Kind" still amazes; 35+ years later 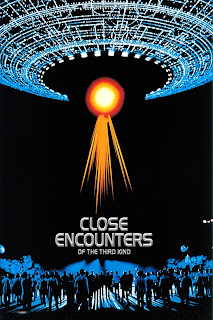 Released in November of 1977, "Close Encounters" is one of those movies that invoked so much magic and awe in the audience, it left them driving home wistfully thinking of their own origins; and the entire galaxy. Richard Dreyfuss plays Roy Neary, an electrician in Indiana who sees UFOs while on a night call and is mesmorized by them completely, following them until it even derails his marriage. Jack Nicholson, Dustin Hoffman, and Gene Hackman all turned down the part, originally thought by Speilberg to be played by Steve Mcqueen. While on the set of the masterpiece "Jaws", Dreyfuss slowly coaxed Speilberg into being the leading man for this gem as well. In the beginning we are shown some ww2 planes left in the desert strangely, minus the pilots.

Then, we are shown the predicament via air traffic control of two planes having a near collision with a UFO, startled. 3 year old Barry in Indiana is woken up when his battery operated toys start moving on their own, and goes out the door to chase the beings. In one of the best moments in movie history, Roy is stuck at a railroad crossing looking at his maps when a ufo slowly buzzes over and shines a light directly on him. the crossing sign shakes, the truck battery goes awry, and he is genuinely terrified. Some highway patrolmen chase the UFOs, and another grand scene with them flying through the toll booth is shown. Eventually Roy becomes so obsessed that he makes a model of Devil's Tower in his basement, where the United Nations has constructed a communications center and landing pad. Roy is accompanied by Jillian, a woman who also is interested in the UFOS, to the landing site to witness a final spectacle of interstellar wonder. 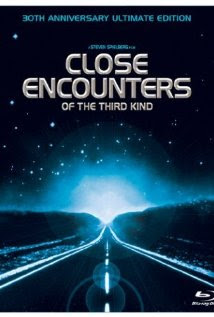 People in the industry joked that the 3.3 million dollar effects budget at the time could be used to make an entire other film, but if you go revisit this classic, you will be glad they stuck with it. Jillian is Barry's mother, who has been taken by the aliens. When they sneak onto the landing site, the night sky by Devil's Tower with the lit landing pad looks like a perfectly painted surreal setting, and hints of global governance tell us that even back in 1977; the whole world would attempt to join over events concerning interstellar peace. When the craft lands, the beings are somewhat like the "grey" aliens portrayed in later films, but curiously friendlier. The missing airline pilots along with young Barry are released, and a few other choice events happen.

Said to be a homage to his younger days when Speilberg saw meteor showers with his father in New Jersey, this film is almost like a child's dream; wherein all elements of hostility are ruled out in the end. If you revisit this film you undoubetdly may drag along a bit in the middle; but as many masterpieces the beginning and end are essential. "ET" was a bit more lovable and may have had more heart, but "Close Encounters" is the big daddy of the alien genre; and many buffs will raise a glass to it for decades to come.
Posted by Jonnymwpro at 10:06 PM