Surf Art by Jesse Miller; Endless Waves Through His Eyes 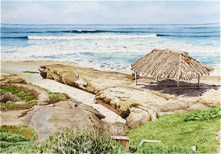 Since I have a passion for the ocean, I'm easily won over by surf art, and people who can paint. I can write, but my paintings look worse than a preschooler's. So today when
I was looking for my next feature, I ran across Jesse Miller's portfolio, and immediately deemed it WAY above average. The first picture I really fell in love with was "woodies" on the second row of the print page. It's a spectacular view of three surf cars from the rear with some beautiful orange Hawaiian flowers in the foreground.

The "Kneepaddle" print has an awesome vision of the ocean; it is a bit calm and rippled, even though the surfer is going over one wave, in preparation to turn around and surf the next. The hues of blue are immaculate, and these have the spirit of frontside carves, wall drops and Aloha all over them. "Casa" and "Waimea Light" are other treats on canvas, with a view of a pier and very dark dawn or dusk on Waimea. The "8A" painting is still a killer view of one that you may not think would be as nice as the ocean; from the highway. But it is absolutely killer, because you are exiting to the North Shore with some trademark Hawaiian mountains in the background. 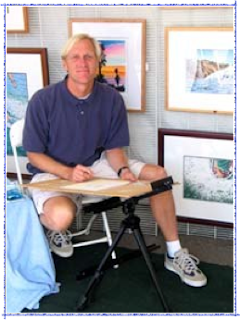 Born in San Diego, Jesse was drawn to Brigham Young in Hawaii immediately because of his love for the ocean. Towards the end of school, he had progressed immensely and was winning awards in collegiate displays and exhibits. After school he got on as a lifeguard back on the mainland at La Jolla and Blacks Beaches; He has paintings in galleries in San Diego and has taught many aspiring others in watercolor and beyond. If you live by the ocean, or are landlocked like the rest of us and need a reminder of how pristine and moving it really is; these are some high up on the excellence scale. To check out his work in detail or contact him, click:
Here.
Posted by Jonnymwpro at 1:54 PM