"Place Beyond The Pines" hits DVD/Blu-Ray this Week 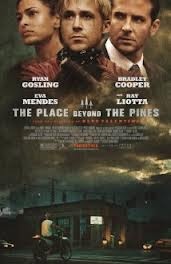 "The Place Beyond The Pines" was for the most part my favorite movie so far this year. All though it is a travesty I have not yet seen the newest "Star Trek" installment and that could be tops for me as well, "Pines" releases on DVD today. Most Trailers lead you into believing that it is just a tale of cops and robbers, but the mysteries of upstate New York, Gosling's desperation to provide for his child, and the generational span of threefold really unwinds nicely.

Ray Liotta, known widely for "Goodfellas", a true masterpiece, is great here as another rural cop on the take. Some perfectly spun and delicate things happen here when they take Gosling's character out one night to search a house; and Bradley Cooper's portrayal of a cop who has to make a choice with his back against the wall really did surpass my expectations. "The Hangover" franchise was very successful, but the character he emulated here was a bit more like a conservative version of his role in "Alias".

With birthright issues, crime, drugs, and the things that can happen years after an occurrence of tragedy, this movie shines in a lot of ways. Gosling's donning of Metallica shirts and prowess as a getaway driver give this just a bit different of tone than the usual bank robbery yarn. There have been a few films that really do make you wonder what goes through your mind when you jump on the counter with a handgun and demand money, and this one gives a few different angles.

In an age where plastic films and remakes will soon become more commonplace after more flops like "The Lone Ranger", tales like this will be welcome for years by critics. There is a certain element with certain combinations of casts that will always win over many diehards, and watching this one unravel really is certain to do so. Sometimes just existing as a family unit and tending to your demons is hard work; and when you throw in some dirt bike skills and a location not filmed in frequently; you can hit the jackpot.
Posted by Jonnymwpro at 7:07 PM