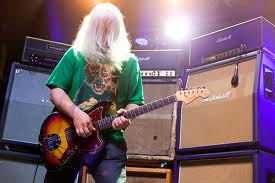 J Mascis plays a Jazzmaster among others and is very, very, very loud. When I saw Dinosaur Jr for the second time ever a while back, it was so deafening it hurt. Nonetheless, the recorded product is always choice, and believe it or not; has some quiet moments. This November, the book Dinosaur Jr. By Dinosaur Jr. will be released, with two different editions. There's even an extra tour diary and many behind the scenes photos.

In the current climate, some bands could release a book like this and no one would care. I guarantee that a lot of people will care about this one; they are a band with a one of a kind sound. Saying they are influenced by acts like Neil Young is true but doesn't even scratch the surface; There are tons of good riffs and sounds here. From "Green Mind" to "Farm", this band formed in 1984 had one of the most distinct sounds ever created. Large doses of feedback, gain, and distortion will definitely morph into tons of great coffee table pictures to look at.