A Futuristic ride through "Oblivion"; A Drone Repairman's Journey 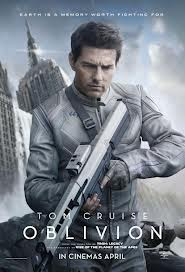 Upon putting the newly released DVD "Oblivion" onto the big screen, a few true sci fi aficionados had warned me that it just didn't live up. I believed them, but was curious; seeing things through different eyes is sometimes crucial, and due to Indian Summer for weather, some good happenings, and the like; I was just not in the mood to pan anything unless it was as one dimensional and fake as could be. Another one of my friend's complaints were all centered around Tom Cruise as Jack Harper; yes, he has been demonized as a bit weird to say the least lately; but I buckled in and enjoyed the ride.

Jack is a repairman of sorts who tends to drones in an Earth that (Surprise!) has been brutally scavenged and raped of its resources. His romantic interest and partner Victoria (Andrea Riseborough) lives with him in an incredibly elevated futuristic home, wherein they are getting ready to depart Earth. The alien force Earth has been battling for the last 60 years have blown up the moon, and the rest of the populace has departed to Jupiter. In the beginning we are shown Jack seeing a woman in a crowded New York street (Olga Kurylenko), and we are guaranteed she will reappear.

Being a "Blade Runner" and "Star Wars" fan of course, I immediately loved the "cloud house" that the two live in and is their home base for patrolling the Earth. It simply didn't matter to me if it was kind of cliche, the modeling and backgrounds were intense, and done with great attention to detail. Jack flies through some of the last greenery left on the planet, and these sequences are wonderful as well. Every movie that depicts the future has it's own tone of white noise and sterility; all of the futuristic gadgets abound, but the main characters still battle themselves. "Oblivion" is no different; and when the woman Julia from New York comes back, we are shown that is in indeed Jack's wife, and he had his memory erased.

All this sounds like things that have been done in the movies before, and yes, they have. The formula has something special, and in this critic's opinion, if you don't enjoy Tom Cruise, it doesn't matter. We are shown a location in the woods that is a sanctuary, where none of us would want to leave. Yes, there are some throwbacks to "2001 A Space Odyssey" and some other familiar material. With a bit less of a "what if " ending and the first half being the stronger half; I have to give this one a thumbs up. Two nights before I had watched a film about bounty hunters in the South that was pure drivel; with no depth and nothing but killings and horrible dialogue.

"Oblivion" holds up for a fun big screen viewing, and takes from the older school of movie making. Is it perfect? no. But in times that are leaving us desperate, searching for spiritual salvation, and worried about the future, tales of search and rescue with some nice landscapes thrown in are choice. Don't think too much, don't draw too many parallels,and remember all the cool stuff you had like spaceship models. It's all here for the viewing, and is a great new release on blu-ray for the fall.