During  1982, a very important moment took place in science fiction film history, although it was not fully endorsed by many viewers until later. Harrison Ford glanced out wistfully while flying over pyramids of what the modern world made of Los Angeles, and clamored down on his duty of hunting down replicants. The first "Blade Runner" film was a true spectacle of film noir, with light sources coming in from side angles like mad, dystopian themes that had people thinking about the future placidly before it came, and a rather prophetic call to think about our existence. It was irresistible to enjoy yourself during the ride, and cult classic status was gained faster than you could push "pause" on a VHS player.

A lot of us thought there would never be a sequel. This was one movie that stood so far out on its own ledge, that its defining moments were never thought to be duplicated. Everyone in the loop wondered if there could ever be a sequel, reboot, or anything that even resembled the original. Where do you begin? storyboards upon storyboards, deleted scenes that don't quite work, and the incessant tugging on you as the filmmaker to present to the audience something even close to what Ridley Scott presented more than two decades ago. 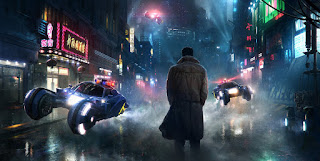 I put all of my judgments aside, and walked into a theater today. I had a few spoilers sent my way, and paid them a bit of attention, but patiently waited. The first thing you notice about this film is that it really succeeded in being visually perfect. Perfection is tough, especially in a time when drone footage, slick editing, and massive CGI can swoop down and take over. We are shown more. It's a simple premise at heart, but the city of LA, and the outer boundaries that this movie involves completely won me over. They won me over so easily, that every gray cloud, multiple-ship arrangement while flying, and shot interwoven with the musical score had me thinking about the films' next pulse obsessively. 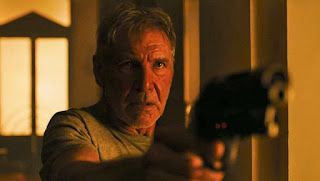 Ryan Gosling showed many during pictures such as "Drive" and "Place Beyond the Pines" that he is a very multi-faceted master of the screen. If he is angry, you might not know it. If he is beginning to get stressed, you may just see an inkling. Most importantly, he truly was made into a young version of Harrison Ford for this new film. He eventually channels the character from the first film completely, with his thick raincoat, sordid attitude, and tired existence while taking part in a "robotic" relationship of his own. During moments where this relationship becomes more complex, we are completely sold on the art of film. Elements of Hitchcock, Michael Mann, and directors such as Marty S enjoy throwbacks here.

What I want all of my readers to understand is how carefully woven the gumshoe tale has been attended to. There really is a case to solve at hand in the making, and during times of modern lore, many stray to the hastily-done plot. A movie that is this visual is hard to simmer down. You are manipulated from the beginning, as you become more and more curious about bleak landscapes, brutal assaults, robots being "retired", and the reasons why you'd want to be a futuristic private investigator in the first place. There is so much to enjoy here, and so many opportunities to sit back and do do. 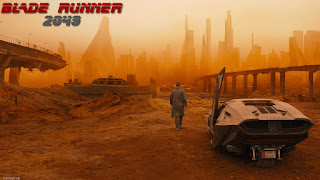 Robin Wright shines as the dominant boss who needs answers, and honestly, everyone in this film gets to. I loved watching her as Kevin Spacey's wife in "House Of  Cards", where she really has the opportunity to show her stake in a partnership. "Blade Runner 2049" is astoundingly about loss. We are not just lured into a ride for no reason, and every single element of detail has been taken care of. We are shown that the people in charge of the planet will tarnish it, that we will become owned if we don't front a corporation, and that during the entire ride down, there are moments of tech-enslavement and desperate intimacy that are dazzling and unforgettable. This is a journey well worth buying the ticket for, and one that will "implant its image on your SD card" for many days to come.     -J
Posted by Jonnymwpro at 9:36 PM