Portraying The Under the Rug Regimen of Child Labor: Tj Templeton's "Waxing Candidly" 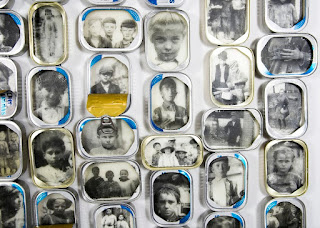 Years ago in 1984, I spent time in the nation of Bangladesh, which still had scars from its liberation from Pakistan, a very malnourished population, and a very obviously large number of children who were working under fairly barbaric conditions. On this rainy day in Lincoln in mid-November, I went with my editor to a private showing of Lincoln artist TJ Templeton's latest display at the Spatium Gallery on O Street downtown. In the main room of the display, he has very painstakingly and dutifully captured some of the faces that were components of the American child labor force, and inspired by photographs from Lewis Hine. Children were then used to provide many companies cheap and long hours of labor, and sardine shops were one of the usual culprits who profited from these exploitations. 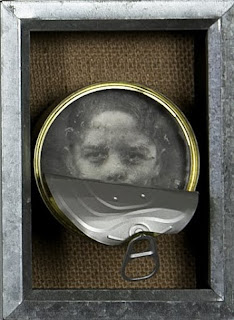 In current times, TJ recognizes that this effort has been largely outsourced, with companies in nations such as the Phillippines and India taking on the brunt of the business. This display that continues the entire month of November in the gallery has the sardine cans as the main attraction, but delves uniquely into the realm of bridges, his collection of Cold War style propaganda posters he created ten years ago, and some captivating works of visions from the studio. It took him quite some time to perfect the task of placing the images and the wax into the empty sardine cans, and you quickly realize this when gazing at the wall of haunting black and white portraits.

In the times we live in, the race to build things cheaper and at the path of least resistance from labor laws and regulation will continue to be intense. When Tj decided to put much energy into another facet of his art on display here this month, it was his own disdain for the neocon agenda. He redesigned WWII and New Deal era looking propaganda style posters into his own breed of graphic art that placidly evoked his own opinions, and his opinions were shared by so many that they were even featured in textbooks. and found their way on to t shirts, magnets, tote bags, and even onto national TV outlets such as "The Daily Show". Scared outright by the elements that he felt were going to gain control of the nation, he really poured his heart into these images that were used in an online news portal.

From the proceeds of his marketing genius for this "Project for the Old American Century", he ran as a very progressive liberal for a state representative in Iowa during 2008. During this he experienced intense retaliation, death threats and other forms of scorn for his free thinking and very anti-globalist sentiment. There are many who dream of some form of social change, and imagine doing just about anything to accomplish it. When you really get down to business and start cranking out material that others will deem offensive, you find out firsthand the ways in which some people don't want change, and the lengths that they will go to keep things towards their version of what they want to the world to be. 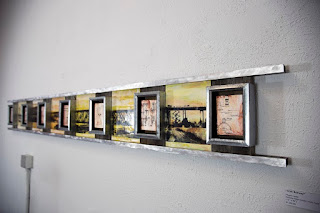 One of the reasons why this exhibit is so important is that it really exposes many talents: the time and effort alone spent on the sardine tins, the elaborate portraits of bridges that TJ spent years of teenage angst walking on, and his own full-scale leveraged attempt at getting folks to see a bigger picture of what was happening to the nation of America. The bridge in question is a legendary Kansas City Icon: the A.S.B. bridge. There were only 3 bridges ever to have this type of construction: cars and pedestrians gained passage on the top, and railways on the bottom. The extreme underside can be raised to let boats pass underneath without disrupting the traffic on the top. 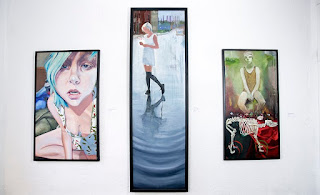 These bridge works are incredibly detailed. We have seen many others similar to this with industrial smokestacks in the distance and an extra wide view that depicts every etched nook and cranny; but TJ's work here is intricately defined, and brings to mind how much knowledge anyone would have to acquire to be a structural engineer. Beyond the structural layers, the well-portrayed hues of blue in the background and reflectionary details on the water are of the upper end of all the art I had seen over the last three years, even after spending time in one of the ten biggest cities in the nation. This thought provoking and technically proficient display will be at the Spatium until the end of the month; but unfortunately, the many social and economic problems that TJ chooses to tackle with his work may be around for decades to come, providing no shortage of inspiration.

Posted by Jonnymwpro at 1:24 PM